A short write up on Mobile RS-24 Yars ICBM a MIRV'd ((Multiple Independently Targetable Reentry Vehicles) variant of Mobile Topol-M ( SS-27 ) ICBM , both share quite a few common characteristics ( 50 percent similarity per its Chief Designer ) but differ significantly in their payload and next generation BGRV/Glide Vehicle that Yars carry  compared to single warhead Topol-M.

As with previous write up on S-500 will stick to  known facts on these system with reference to interview with MITT Chief Yuri Solmonov and Commander of Strategic Missile Forces Lt. Gen. Sergei Karakayev where these ICBM are managed and deployed.

SS-27 Topol-M was developed in the early 90's with ability to MIRV the ICBM and as replacement of SS-25 , The MIRVng part was not followed through due to Arms Limitation Treaty of the late 80's and the political event that followed with the disintegration of Soviet Union in the 90's with the Political and Economic upheaval that followed. Nevertheless the designer went with a solution for Topol-M SS-27 that could be MIRV'd with 3-4 Warhead if need be and a single 800kt TN warhead was adopted for Topol-M.

As older SS-27 and SS-19 started getting decommissioned at the end of its guaranteed life  MIRVng Topol-M was becoming an attractive option with MITT spending years in developing new generation of BGRV/HGV that would be lighter , manouverable , faster and that  could carry a lower yeald warhead with much better accuracy and so was born the RS-24 Yars.

RS-24 Yars  ICBM has a launch weight of  49 Tons and has a range exceeding 11,000 Km with a throw-up weight of 1200 kg and carries 4 ThermoNuclear Warhead of 250-300 kt yeald along with decoys and jammers as countermeasures.

Most interesting is its New Generation of  BGRV/HGV that compared to its Single Warhead  Topol-M Warhead that  follows a Porpoise ( Skipping ) Trajectory  , the New Generation of Hypersonic Warhead of RS-24 was capable of performing altitude and trajectory maneuvers

To quote  RVSN Commander Lt. Gen. Sergei Karakayev Russian Strategic Rocket Forces (RVSN)
“The capabilities of such combat means were demonstrated to U.S. technical control means during the trials of the Yars ground-based mobile missile system and the Bulava sea-based missile system. It also concerns hypersonic warheads capable of performing altitude and trajectory maneuvers,” he told journalists. “The new missiles have characteristics that allow them to stay invulnerable at all sections of their flight,” Karakayev said.

The capability of RS-24 ICBM was further reveled to  some extent by RVSN Commander Lt. Gen. Sergei Karakayev New RVSN missile invulnerable in all phases of their flight and are able to break through any possible over the next 20 years, missile defense


The Strategic Missile Forces of the Russian Federation stand on alert missile systems to successfully complete the flight test missiles RS-24 "yars", equipped with multiple reentry warhead. As reported in a press briefing the commander of the Strategic Missile Forces, Lieutenant-General Sergey Karakayev, this weapon has incorporated the best features of the missile "Topol-M" and received new combat capabilities.

"It should be noted the ability of new missiles to be invulnerable during launch due to mobility and address, if necessary, challenge any possible breakthrough in the next 15-20 years in missile defense. To solve the problem of missile defense effort the developer have provided such characteristics that allow us to speak about the invulnerability of our new missiles in all phases of their flight, "- said Karakayev.

He explained that the ICBM "YARS" invulnerable to missile defense, including Boost Phase, the most dangerous phase of the flight, with its Multiple Warhead. New ICBM Yars "have maximum reduction in boost flight phase, much shorter in time than the older types of missiles." "In this short boost phase of flight the rocket vigorously maneuvers in height and on the direction (trajectory ) making it impossible to forecast the meeting point for interceptor", -  said the commander.

"To make the missiles of these properties required to create a robust and lightweight design, powerful engines and control devices, the ability to accurately operate at significant G Factor ( overload ). , flight tests carried out in recent years have confirmed that this problem has been solved ", - he stated.

Speaking about the next section of the flight "Yars" - Exo-Atmospheric flight warheads Karakayev noted that all of these units are covered and Decoys and Jammers "Warhead themselves are now  "stealthy" that is, the maximum reduction in the intrinsic radiation in all ranges. waves through the use of special forms and surfaces that absorb heat and radar radiation ", - informed the commander.

In the final atmospheric portion of flight during and post re-entry ICBM warheads flight portion is protected by the "Special Heavy Decoys" which are indistinguishable from the real warhead till it reaches earth " "The results of the flight tests have shown that in this area our designers managed to solve tasks," - said Karakayev.

"All this allows you to confidently predict the ability of Russian strategic nuclear forces to ensure security of the country in any development of the international situation", - concluded the commander of the Strategic Missile Forces.

Yuri Solomonov, questioned the effectiveness of a number of American and development on missile defense. "Those technical means by which the Americans are trying to solve the question of the object of interception, moving at a speed exceeding 10 kilometers per second, this task is technically unsolvable," - says Solomon. In real conditions of combat employment with the surrounding dozens of blocks and hundreds of false elements, completely identical warheads on the totality of recognition features (dynamic, thermal and radar characteristics), he emphasizes, to solve the problem of interception in the time available it is impossible.
Missile Shield

In liquid-propellant rockets very long active part (boost phase) of the trajectory, they can not be implemented in a high level of linear accelerations, which is associated with the specific LRE. Therefore, the existing liquid-propellant rockets active regions is 3-4 times longer than that of "Topol-M", "Yarsa" or "Bulava", while promising, this value will decline slightly - is 2-3 times longer.
Interview with MITT Chief Yuri Solmonov 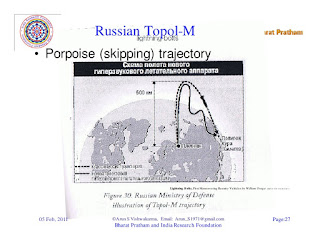 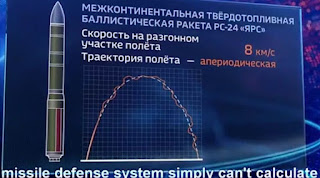 2 )  During Boost Phase the missile experiences significant Overload/Acceleration which increases its G Factor manifold as it accelerates and changes direction to avoid getting intercepted during boost phase of flight.

Note Boost Phase of Missile is the most vulnerable phase of any Ballistic Missile as it tries to leave the earth atmosphere and start the 2nd stage of flight with ejection of 1st stage booster.

3 ) Once the 2nd stage starts as it reaches an altitude of 150-200 km the Yars deploys  Decoys and Jammers which makes it harder to distinguish its warhead from ICBM Warhead/Missile  and Jammers try to Jam the ABM Radars while protecting the Missile & Warhead , while Yars accelerates and manouvers in space at speed of 10 km/sec ( Mach 29 )  as mentioned by Yuri Solmonov in his interview

Note Advanced Decoys and Jammers are a highly classified subject and much less is known on this subject in any open literature.

4 ) Post the 3rd Stage and deployment of BUS the Warhead Manoveres and Heavy Decoys are employed as it re-enters the atmosphere.

Development of Heavy Decoy which has lighter weight and yet  re-enters at the same speed as the heavier warhead is a key breakthrough achieved during development of Topol-M SS-27 . Decoys have the tendency to burn out during re-entry and only the warhead enters the atmosphere making it easier for ABM system to track the real warhead as it reenters and slows down to a speed of 5 km/sec , With the deployment of Heavy Decoys that re-enters with the warhead and remain till it is closer to earth complicates the discrimination of Decoys with Real Warhead and forces the ABM system to target the decoys and warhead an exchange ratio favorable for  attack system like ICBM.

Yars advanced BGRV starts its maneuvering phase in the atmosphere towards the targets with significant G Overload due to lateral manouvering of BGRV making it difficult for the interceptor to predict an intercept point while keep up with High G Manouver in Atmosphere.

ABM interception is both space and time constrain as the Interceptor does not just have to deal with  Trajectory and Height of the target it is intercepting which itself keeps changing for advanced BM but also Time is a key factor as the target acclerates at more than 5 km/sec in the atmosphere a miss factor of just 1 second by Interceptor while intercepting the target will be a miss distance of more than 4 km from the target.

Although the throw up weight of RS-24 is lower then SS-19 with a lower yeald warhead but with the Mobility of the System , Matching Range and Significantly improved Missile Defense Characteristics  and four warhead of  300 kt each and much better accuracy of system , RS-24 will not just replace these older generation missile but would also serve as base platform for next generation of RS-26 ICBM and Rail Mobile System currently under development.
RS-24 Advanced Warhead has also been adopted for Bulava SLBM

Actually, with mirved missiles not nearly as many are needed. Currently Russia has 525 ICBMS(and SLBMS), most of which are multiwarhead. This is enough to hit every conceivable target in the US and EU dozens of times over.